Gateway to Russia: Senior Vickie Wang reflects on her experience with the Stanford-US Russia Forum 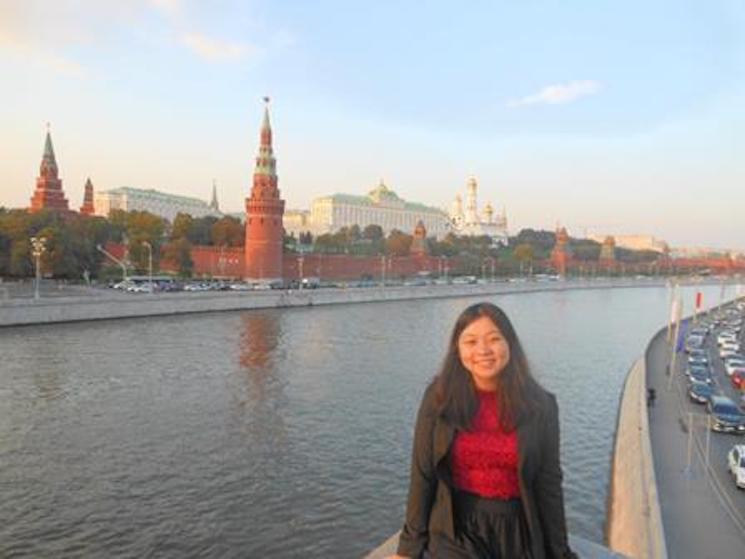 The Stanford US-Russia Forum is a student-run program that brings students from American and Russian universities together to solve a common problem. The conference began with a week in Moscow, Russia in September and concludes with a presentation in Stanford, California in April. In between these meetings, students research and collaborate within their research groups to produce a research paper as well as a policy proposal to present at the Stanford conference. The Gateway scholarship helped fund my travel to Moscow, Russia.

The specific group I am a part of is cybersecurity, and the focus of our project is the lack of security in private sector social networking companies due to the holes in the current infrastructure and specific ways that the companies in the United States and Russia can cooperate to fill these holes. We are creating a framework for responsible user policies that can be adopted by social network and search engine companies to better protect users and provide a consistent legal standard for how to deal with data breaches.these meetings, students research and collaborate within their research groups to produce a research paper as well as a policy proposal to present at the Stanford conference. The Gateway scholarship helped fund my travel to Moscow, Russia.

It is especially important to learn about the state of US-Russia relations from the Russian perspective, since recent portrayals by the American media are decidedly negative. Many of my assumptions were challenged, and I am now more critical in the way I consume news. I became aware of the subtle biases I hold, and have subsequently thought through many of the ideas I previously unquestionably acknowledged as truth. It was also wonderful to meet and to keep in touch with the Russian delegates, to directly experience their culture with them, and to hear their honest opinions about their country and the United States. Being part of this program has taught me to better understand how different nations view themselves and how to most effectively communicate so that we can work together to face a common problem.Although my academic and professional goals are not specifically about cybersecurity, this program has broadened my perspective about the economic, political, and cultural ties that connects countries. As a Mathematical Economic Analysis and Policy Studies major it was interesting to get an in-depth understanding of how these nations’ investments influence their diplomatic processes. Through the lenses of my Asian Studies major, I appreciated learning how Russia’s relationship with the United States and with China affects the Sino-American relationship. It is interesting getting an in-depth understanding of how these nations’ investments influence their diplomatic processes.

Furthermore, this program is teaching me how to work collaboratively with others on an issue. I have three group members, in three countries, and we need to work together to produce a research paper and a policy proposal. To do so, we conduct weekly Skype conference calls, despite being in completely separate time zones, and we each have different responsibilities to complete before the next meeting. This has taught me to make the most out of the time we do have to interact and thus, to conduct efficient meetings, as well as understanding how to delegate work so that we can fully utilize each member’s talents and interests to create the best work.

Through the generosity of the Gateway travel grant I received, the SURF program has given me exposure to a broad range of ideas and ways of thought. Being a part of this program has challenged and inspired me to be a more effective student, team member, and global citizen.